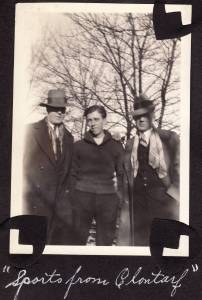 This photograph was in an album belonging to my grandfather, John Regan’s, cousin.   My grandfather’s aunt Mary Hill O’Brien moved to Chinook, MT from Clontarf in the late 1910s and daughters visited Clontarf on several occasions throughout the 1920s.

A couple of people have agreed that the man in the middle is Richard McMahon, the son of the Clontarf depot agent Frank McMahon (who was my great-grandfather’s brother).  The two in the hats?  Well, it is kind of tough to see their faces, but my sources say they are either Reardons or Dohertys.

2 responses to “Sports from Clontarf”