I received a comment a couple of weeks ago from Ian, who is a descendant of Margaret Shea and Thomas Dailey.  He was curious if I had any information on these families.  Here’s an excerpt from his comment:

I was wondering if in your research you have come across any information on residents in Clontarf by the name of Shea or Dailey.

I do not know however if my ancestors lived in Clontarf or in Benson (or somewhere in between). We have an album of photos dating from the end of the 19th century. Many are studio photos from the R. E. Brandmo photo studio in Benson. Judging by the quality, number and their clothing, they were relatively well to do.

It appears that Thomas and Margaret had a number of children in Benson/Clontarf area before moving to Montana; Francis Veronica (my great grandmother, married Patrick Kenny and moved to Montana as a school teacher), as well as Agnes, Michael, Thomas, Alice and Mary Ellen.

I recognize the Shea family name from the plat maps in Tara Township, and I’ve encountered Michael Shea in a couple of places – notably the Clontarf Township records and the McDermott General Store Ledger.  The 1880 US Federal Census indicates that Maggie Shea, age 21, is living with her parents (Michael and Alice) and siblings (James-20, Thomas-19, Nancy-16, John-15, Mary-13, and Alice-9.)

The first six of the Shea children were born in Wisconsin, and in 1860, the young Shea family was living in Alto, Fond du Lac county, Wisconsin.  The family includes James Shea, aged 70 – presumably Michael’s father (Ian – your great-great-great grandfather?)

In 1880 Thomas Dailey lived in Marysland Township (south of Tara) with his younger sister Julia; Thomas farmed and Julia kept house.  Margaret Shea and Thomas Dailey were married at St. Malachy Catholic Church on August 30, 1882.  The witnesses were John Cahill and Mary Dailey.  In 1900 the Dailey family lived in Benson, Minnesota where Thomas Dailey’s occupation is listed as “fire insurance.”  By 1910, the family has moved to Great Falls, Montana.

A couple of messages:

Where does the time go?

I just realized that February 21, 2011 is the 100th anniversary of the marriage of Clontarf residents Annie Hill and Cornelius (Neil) Regan! 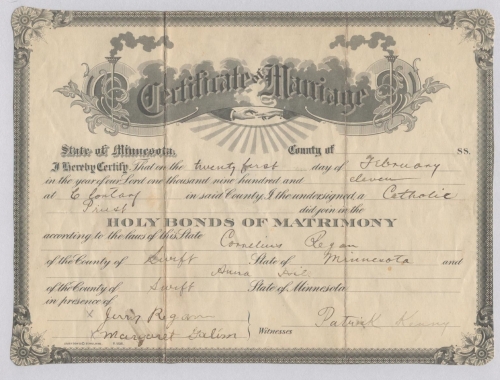 Anybody else recognize this chair?  I have seen it  in a several portraits from Brandmo Studios in Benson, Minnesota.  Here is their wedding portrait:

Anne sent me this story that appeared in the January/February 1989 issue of the Swift County Historical Society Newsletter.  It might be mild now, but read what can happen…

It was a calm, mild beautiful morning with just a dusting of snow on the ground that Feb.. 13, 1923.  Sylvia Walsh, (later Sylvia Chevalier) teacher of rural school District #68 in Sec. 7, Clontarf Twp., was walking along the new road to school in high spirits.  The weather was great, she had a wonderful boarding place at the Peter Razink farm, and then too, she was eagerly looking forward to the Valentine dance in Clontarf the next evening.   School was called at 9:00 am.  Opening exercises were over, the children had settled down, and the day’s work had begun. “All of a sudden there was a thunderbolt or an explosion.  A storm had hit!  All at once, the snow came down in sheets, the wind blew with a tremendous force, and there was a blizzard so thick that no one could see anything.  Sylvia said, “Looking out the window, you couldn’t see anything except the window!”   The children immediately became alarmed.  There was no telephone at the school house.  Sylvia soothed her pupils saying, “Oh no! We are going to save our lunches and have a good time!”   “About half an hour later, in walked Oliver Goulet and his hired man.”  The Goulets lived just across the road from the school house.  The men had tied a clothesline rope to the door of the Goulet house, and then proceeded across the road to the school house.  Mr. Goulet calling out jovially, “You are all going to come with us, and you are going to stay with us.”   Not much more was said, the preparations were made to leave.  Sylvia banked the stove and then told the children, “We’ll make valentines.”  They got together all kinds of construction paper, colored crayons, pencils, scissors, and paste to take with them to the Goulet’s home.  Each one carried a lunch pail,  Sylvia and the hired man carried the valentine makings.  Sylvia locked the school house door.  The men tied the clothesline rope securely to the door knob and the procession started on the trek across the road with each person holding onto the line.  Mr. Goulet was first, then the older children, the younger children followed, with Sylvia and the hired man bringing up the rear.  The smaller children would stumble, and the others would help them up.  All of them kept their hands on the clothesline, moving slowly ahead, and not being able to see anything for the driving snow.   Finally they got to the house.  Mrs. Goulet, smiling reassuringly, opened the door and invited them in.  “And all the children trotted in with their overshoes on.”The first thing they did was to sit down and eat their lunches.  The fun started; they began making valentine.  “All the children were happy, I know that,” said Sylvia.   Mrs. Goulet made supper for everyone, and then made beds for them.  One girl said that there were six in her bed, all lying crosswise.  Everyone was thankful to be safe and warm, and besides that, they were enjoying themselves.   The storm kept on with no let up for three days.  Poor Mrs. Goulet cheerfully kept cooking.  Their newly married daughter happened to be there, so she was snowed in along with the rest.  She helped her mother take care of the 18 extra people.  Finally the groceries started to run out, but Mrs. Goulet made pancakes, and more pancakes, which everyone enjoyed.  There was no problem with the children.  They were having fun!  They played games including “Button, button. Who’s got the button?”  Mr. Goulet played the violin, and they sang songs they had learned in school.   The storm was over the morning after the third day.  The fathers came with horses and sleighs to get the children.  By that time, there was no wind at all and it was not so very cold.   Due to the graciousness of their hosts and the ingenuity of their teacher, the children had no anxiety at all.  “It was like they were on a three-day picnic.”    One little girl didn’t want to go home!   The snow was piled high and hard.  Sylvia climbed over a snow drift which was higher than the chicken coop, and started out walking to her boarding place.  No doubt she was reflecting on the experience of the past three days.   This was Sylvia’s first school and she taught there for six years.  She also taught several others schools in the county.  She was married to Oliver Chevalier and after their family was raised, she taught for twelve years in the Beaver Lake School in Maplewood, St. Paul before her retirement.   One this is certain,—neither she, her pupils,the Goulets, or the parents, every forgot the February blizzard of 1923.

Genealogists amaze me.  I have a great deal of respect for people who display the kind of commitment necessary to painstakingly research every detail of a family tree and compile a comprehensive family history.  Successful genealogists manage to stay on task and persevere even after encountering countless obstacles and dead-ends along the way.

Donna from Benson, Minnesota is one of these dedicated genealogists.  Shortly after we started this blog, I realized that, while I knew a fair amount about the history of the Irish in Clontarf, I knew very little about the other residents of the town.  Donna has become my go-to resource for information on some of those families.  She has compiled a tremendous amount of genealogy research on her own family – the Aschemans, as well as her husband’s family – the Chevaliers.

There have been many inquiries about various branches of the Chevalier family over the past several months.  If you don’t read the comments on the various posts, you are missing some great feedback and stories about Clontarf.  Click here to read the post about the Chevalier family and make sure you scroll down and read Donna’s comment.

Anne’s comments are not to be missed, either.  She shares great stories and information all of the time.  At the bottom of each post, at the right, is a place you can click to read the comments.  It will have a balloon and say “comments” if any have been left.  Simply click on “comments” and you will learn even more about Clontarf.

And remember, if you are looking for something specific on the blog, use the Search function located at the top right, below the photograph of the train station.

Many thanks to Donna for sharing all of her hard work with us!  Have a great weekend!