Father Anatole Oster married Thomas Shea and Jane Kenna on November 8, 1893 at St. Malachy Catholic Church in Clontarf.  Witnesses of this union were James Shea and Margaret Callaghan.  Thomas and Jane were Jim Egeland’s great-grandparents, and he provided the following history:

Thomas Francis Shea married Jane Irene Kenna in Clontarf on 8 Nov 1893. Jane Irene Kenna was the daughter of John Edward Kenna Sr. and Jane Howard Kenna. Thomas and Jane had 5 children, Francis, Mary, John, Jane (my grandmother), and Dorothy. I know that Thomas Shea’s two oldest children, Francis and Mary, were born in Clontarf. Thomas, a farmer, moved his family to Columbia Falls, Montana around 1897 and then to Great Falls, Montana after a few years. When Jane Irene Kenna died in 1907,  Robert (her brother) came to Montana and he and Thomas took her body back to Clontarf  to be buried with her mother as was Jane’s wish. The (Shea) children were raised for a few years by his sisters (in Montana.)
The children of Thomas grew up, not knowing anything about the Kenna relatives until the early 1960′s when the Kennas who were doing genealogy found the family.

Taking a step backwards, I thought I would share some of the Kenna family history that Jim received many years ago from a Kenna family member:

John Edward Kenna, Sr was born in 1834 in County Cork, Ireland, and was married to Jane Howard, born March 21, 1835 in Ireland.  The date of marriage was May 9, 1858.  They emigrated to America and settled in Concord, New Hampshire where their children were born.  The children, Ellen, William, Jane, Robert, and John, Jr. who was born May 5, 1871.  When the youngest, John, was 9 or 10 they moved to Swift County, Minnesota and bought a farm at an Irish settlement, Clontarf, near Benson.  A year or so later, on August 7, 1882, John Sr. was killed while digging a well on the farm by suffocation with gas in the well.  Jane continued on the farm with the help of her children until her death Feb. 27, 1897. 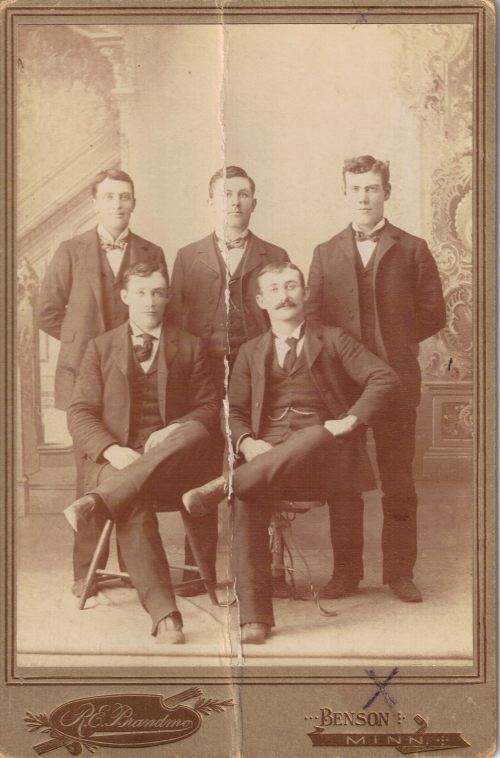 I may have previously posted this photograph, but I thought we could get some fresh eyes on it.  The man standing on the right is John Foley (brother of my great-grandmother Mary Foley McMahon) and seated on the right is John Kenna.  The other three men are unidentified…any ideas?

Both the Foley and Kenna families came to Tara Township from Concord/Fisherville, New Hampshire.  Perhaps these men represent other families who also came from New Hampshire?  Maybe a Duggan or a Kent?

I would love to learn more about the Shea family.  I know they were early settlers in Tara Township.  Tiffany shared some information on her Shea ancestors last week:

In 1886, the Shea family occupied the southern 320 acres in Section 32 of Tara Township.  By the 1902, the only Shea that remains on the plat map is Margaret Shea Dailey who retains 80 acres.  Did the rest of the Sheas all move to Montana?

Through Ancestry.com and this blog  several Shea descendants have made connections.  This is exciting, and I hope they continue to share their discoveries with us!

A few very interesting comments have come in recently about the Shea family.  The recent post on the Shea-Dailey Family prompted some discussion…I love to see that!

I will address the comments in greater depth later this week, but talk about the Shea family brings back our old friends the Kenna family.  I have posted several items about them over the past year or so.  Just search for Kenna on the home page and you can get all the info – obits, news clippings, church records.

I am looking forward to a visit to Clontarf in April.  We will be there April 13th – 15th.  I hope to get together with some of the folks in the area who have helped make this blog a success.  Maybe we could do something in the Hall or at the Prairie Pub?  Let me know what you all think!  This could be the first meeting of the Clontarf History Club!

So…Anne, Donna, Margo, Marlene, the Reardon gals, and anyone else from Clontarf…what do you think?

Does the Prairie Pub have their new stock of t-shirts?  I need to resume the monthly drawings once I get a fresh supply of shirts.

Spring is finally here.  I wonder if the weather is going to cooperate?

In like a lion…or maybe it was a lamb?

March is known as a month of weather extremes in Minnesota.  Blizzards, tornadoes, ice storms, flooding, and mild sunny days are all common occurrences in March.  I am not sure what March 1884 was like in Clontarf, but odds are there was a little bit of everything in the weather department.

There wasn’t much going on in March 1884 at the McDermott General Store.  The only clue as to the weather is that a number of pairs of boots and rubbers were sold.  The regular customers came in for the staples – sugar, tobacco, and oil – but it looked like several residents were busy sewing new Spring clothes.  The spools of thread, pins, and gingham fabric were flying off the shelves – well, that might be an exaggeration, but indeed many customers came in for these items.

My great-great-grandfather Francis McMahon was a loyal customer of Mr. McDermott.  I may have mentioned before the frequency with which he visited the store.  Even in the middle of winter, Grandpa Bushy (as he was known) managed a shopping trip at least once a week.  The McMahon family lived in section 22 of Tara Township, and in 1884 the family consisted of five children under the age of seven.  Most of the pioneer families of the Clontarf area would have had similar young, growing families.  That translates into lots of sewing to keep everyone in clothes, diapers, bed-clothes, etc.

On March 17th, Francis McMahon came to the store and this was his tab:

Grandpa Bushy returned to the store the next day for a pair of boots for $2.75 and 50 cents worth of sugar.

What would be the use for 1/2# of sulfur?  John Ledwidge paid 10 cents for it, and Michael Donovan sold Mr. McDermott 5 and 28/60 potatoes @ .25.  I wonder how they measured potatoes and had Mr. Donovan been saving them in his root cellar all winter?  Maybe he realized he had more potatoes than he was going to use and unloaded them…any ideas?  Please share your thoughts by leaving a comment!

Since we were talking about March 17th, are there any stories out there about St. Patrick’s Day in Clontarf?  Let me know what your memories of the day are, or if you recall any stories passed down about the early days.

What about baseball in Clontarf?  Does anyone have a photograph of a Clontarf baseball team or any information or history?