Wonder who the “dry” votes were? 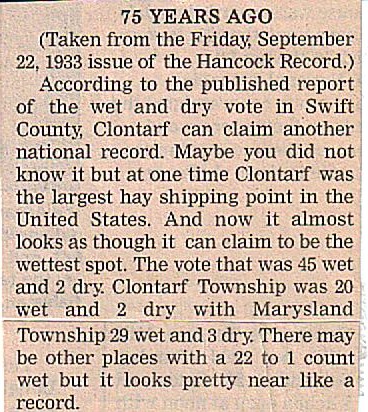 Judging from some of the stories I have heard about Clontarf, it comes as no surprise that a wet-dry vote would have this outcome!  Readers contributed comments to my post earlier this year on the Clontarf Club referencing the days of bootleg whiskey in Clontarf – click here to read the post and comments.  I am a little confused as to when Prohibition was repealed – I thought it was later in 1933.  This autumn there will be a new Ken Burns documentary on PBS, Prohibition.  I guess I will learn more about it then!

This clipping is from 1933, the year my grandpa John Regan graduated high school.  After graduation, he worked behind the bar at Bruno Perrizo’s in Clontarf.  This photo was taken some time during his tenure at Perrizo’s (the apron and the train in the background tipped my grandma off to the time-frame and place.)

Leo Molony (in the hat) and my grandpa grew up in Clontarf together.  When I met Kit Molony Doherty in 2004, one of the first things she told me was the story of how my grandpa saved her brother Leo’s life.

When the boys were about ten-years-old, they were playing “cowboys” with several other boys from town in McDermott’s pasture.  We can imagine them having a grand old time – riding the cattle and doing tricks.  The fun ended when Leo Molony was poked in the eye by a horn.  Scared of the blood and the prospect of being caught goofing around where they ought not be, the boys quickly scattered.  Leo and John were left alone in the pasture.

Kit said she remembers the howl let out by her mother when she saw John with one arm propping Leo up and his other hand pressed to Leo’s face.  There was blood everywhere, and my grandpa was holding Leo’s eye in place in the socket.

Leo lost vision in the eye, but a doctor was able to perform surgery so he didn’t lose the eye itself.  Kit said how grateful her family was to my grandpa for taking care of Leo that day.  She said his presence of mind not only saved Leo’s eye, but probably saved his life.

Somehow I don’t think John received a hero’s welcome when he returned home to his mother after his cowboy adventures!  I wonder if the boys learned their lesson about trespassing in McDermott’s pasture?

A couple of notes…