It’s been a few weeks and I haven’t received much input on the Clontarf class photo I posted (see post here.)

Tressa Burns (whose grandparents Charles and Phoebe Chevalier lived in Clontarf) had a few identification ideas:

Several years ago, my mother and I identified several of the students with the help of some former Clontarf residents.  Here’s what they told us:

Nothing really matches up with the two attempts at identifying these students, but the only conflict is the boy Tressa said was her cousin Raymond Burns and our informants said could be a Chevalier or a Fennell.  But that is kind of close, anyway!  Tressa identified my grandfather “Red” Regan, and I don’t see him, but it is neat that she thought of him! JoAnn – does your mother have any memories of John “Red” Regan, or maybe even of his mother?  They lived right in Clontarf.

Take a look at the photo again and see if these identification suggestions jog your memory a bit.  If you need clarification, please leave a comment and I will do my best.

Another photo to ponder… 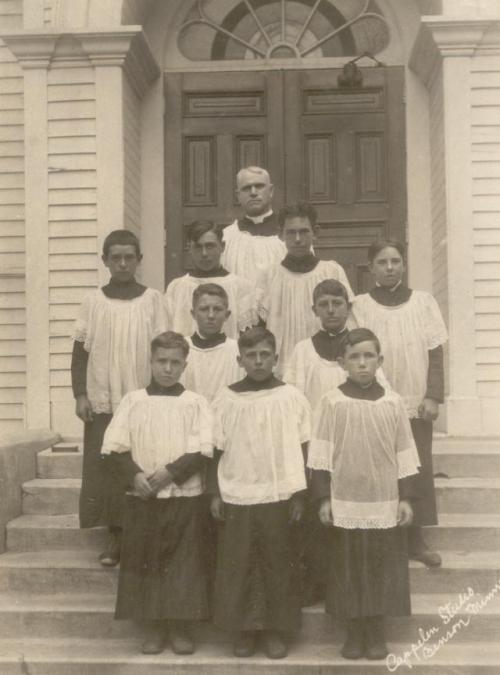 If the date is correct, that would be Father Kenny, and it looks like him.  I have some of the boys identified, but I would like to hear what you think.  I will share who I have identified in a couple of days.